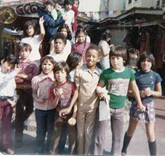 Years gone by and Wiley thinks often about his Mexican family and the hands across the border that brought their lives forward. He remembers the names of the barrio students who touched his life – Maria Gonzalez, Art Flores, Lily Butler, Felix Santillan, Otelia Campos, Miguel Aceves, Frankie Rico and Ora Dean Mason, the one white girl who came into his classroom early one morning, frightened and alone, to tell Mr Timmons that Lily's brother had been shot dead in the street last night, after Wiley's Open House party at school. In the rising and falling tides of Life, he remembers a near-drowning experience, surviving the pounding surf and struggling to the surface (from down under the waves) for just a breath of air. Last he heard, many years ago, Grego was teaching in the LA City Schools and performing puppet theater in the Latino communities he had moved into. Wiley still strums his guitar and sometimes sings these lyrics loudly into the night – Like all good stories, this one ends with the blues.

If I had rubies and riches and crowns
I'd buy the whole world and change things around.
I'd throw all the guns and the tanks in the sea,
For they are mistakes of a past history.

Let me drink from your water Where the mountain streams flood.
Let the smell of wild flowers flow free through my blood.
Let me sleep in your meadow with the green grassy leaves.
Let me walk down these highways with my brothers in peace.
Let me die in my footsteps
Before I go down, under the ground.

- Dylan (with no apologies)