Outside of the schoolroom, Wiley tracked down Luis Santillo, Grego's dad and visited this drunk, impoverished and aged man, living in a flophouse apartment. When he gave him a letter from Grego, he provided a lifeline between blood kin, separated by borders, lost in time and broken dreams. Luis just cried thinking of the family he had left behind.

After a year of inner city blues, Wiley headed back to the west side of town. No more the professional teacher, he was content to study auto-mechanics and work as a pizza chef. One night, in the middle of his evening shift, Grego surprised him again when he walked into the restaurant – with a sinister character by his side.

"Mi amigo, Wiley, I need some pizza and $500 for my friend here. He's a 'coyote' who smuggles illegals into the country. He brought me across the border, into the States, hidden down under the trunk of his car. And now, I must pay for my freedom."

Wiley sorted out the finances the next day and Grego, freed of his political and personal paranoia, became his roommate for a spell. Grego and his father got back together for a reunion, after the long separation of a decade and thousands of miles. 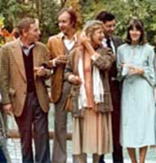 Within a few months, Grego found housing and later, Angelina, Belinda and Grego's son made the crossing into Los Estados Unidos. As fate would have it, Wiley slipped into the ménage-à-trois. He and Angelina dated while she found her own home. They wined and dined and danced to Santana's Samba de Sausalito. One afternoon, they shopped for a leather coat in LA's garment district. Wiley later wore this jacket to his brother's DC wedding and on a tour of the Carter White House, but that's a story for a different day.