Truth be told, I&I took a trip this year and got stoned. The trip was to Jerusalem and the country of Israel. The stone was the marrow of antiquity in the living, breathing bedrock of ancient walls, the sanctity of hallowed halls and the shopping suqs of Arab malls. The buzz was a natural high and I&I’ is still making sense of it all. Who am I? Who am I? Hey, I&I, the narrator guy, Isaac Isaiah.

Now a trip like this (somewhere far away, to a country as distant as it is real) can last a long time, depending on your physical and spiritual constitution. As a wanderer, you must be open to the sharp contrasts of joy and sorrow, faith and doubt, love and hate, conflict and peace, beauty and destruction, mortality and life. Believe me, a journey to the Holy Land will get in your bones and shake you up. So as not to get lost (or be led astray), it helps to have maps and spirit guides. Fortunately, while travelling, I&I had three guides by my side. For the sake of our story, let us call them by their presence (or lack thereof) – Lost Guide, Far Guide and Near Guide. One was physically present; the others were not far away.

The map I&I was given came from Michener’s novel, The Source, an epic story of Tel Makor, a weave of cultures and conquest tracing 3000 years among the ruins and artifacts of this fictional city and the fight to hold holy ground. Between the guides and the guidebook, it took a bit of orientation to get my bearings straight. Let me sort this out for you.

Two of these guides (Lost Guide and Far Guide) have already died but they left behind trace lines through the Time, Place and Space that blanket the countryside: in the great cultures and contrasts of monotheism; in the Jewish, Muslim and Christian peoples; shrines, tombs, churches, mosques and temples; in Biblical tales at the Sea of Galilee, the Judean Hills, the Golan Heights, the Dead Sea and Jerusalem, that ancient “City of Peace”.

I&I was not alone, touring with a group of wanderers, all led through that country by their own curiosities and beliefs. Near Guide stayed close at hand, to keep me from going astray. A little later, she helped carry my journey to the world that is yet to arrive.

A few years back, we had a Triple Play gathering of friends and family, celebrating the trifecta of a twentieth anniversary, a bar mitzvah and a high school graduation, giving rise to a party and the Gravity-Centered Question. Lost Guide came with Grace. They were so in love. Grace was his second wife and third cultural lifeline. He was the product of an upscale New York family and had fathered seven children with an Israeli woman in his first marriage. With Grace in his life, Lost Guide had converted to an Indonesian faith, Subud and once ventured as a pilgrim to Mecca, to pay homage and worship at the Haj. Lost Guide and I&I were DC urban professionals and later became friends and business associates. Through all the BS of this world, it was Lost Guide’s spiritual path that shot me like an arrow through Time.

At our Triple Play party, the price of admission was the Gravity-Centered Question – a puzzle, a parlor game, or a deep philosophical dive, as set forth in conversation by the Russian mystic, Georges Gurdjieff, in his Secret Talks With Mr. G, excerpted for you here:

“Everything you do in Life, no matter how ordinary, is done in relation to that question as center of gravity … My home becomes a restaurant. If I sit at a café and someone comes to my table to ask question, and question is not gravity-centered question, then I can refuse. But in my home, I cannot refuse. So, my home turns into restaurant. Enabling factor for this only grows in America and does not come to me in sufficient quantity to make restaurants. But possibility exists for you to make restaurant, where everyone must pay for entrance with Center of Gravity Question … at this businessman’s club, each day a new gravity-centered question dish must be prepared.”

So, for our Triple Play party, the guests played along, serving up some great thoughts to ponder:

‘Is consciousness a property of empty space?’
‘How many boards would the Mongols hoard if the Mongol horde got bored?’
‘How far is the nearest star?’
‘What’s the dark matter with you?’

I&I did not know at the time, that Lost Guide would leave behind a gravity-centered question, that would be, for me, his last mark in this world:

‘What is within us that has no weight, no mass, but is always alive… a soul.’

In the months that followed our party, Lost Guide, made his own trip to Jerusalem, this time to worship at the ancient Wailing Wall, where he visited in silent prayer, walked away and was struck down by a heart attack. Lost Guide died there, at the Wailing Wall in Jerusalem, where his spirit passed on from this world.

Far Guide, Rabbi Ben Learned, passed on last year at the ripe old age of 93. He had been a family friend since my boyhood days and 10 years ago, presided at my father’s funeral, where he gave comfort and wisdom to the mourning. Good grief is what we called it. In his final year, Far Guide gave a High Holy Days sermon, in which he blasted Israeli Army tactics during the summer’s war in Gaza. Far Guide was a vocal critic of Israel, a rabbi who built bridges with Muslims and promoted inter-faith relations. A US Marine in World War II, Ben Learned went to Jerusalem to study for the rabbinate, and joined the Jewish underground army to battle Arabs. What he had seen made him an ardent pacifist. As he said, “People transformed to just hating, hating, hating – it’s no way for humankind to survive.”

Far Guide angered many Jews by calling for a two-state solution in Palestine and Israel, and forbade the Israeli and U.S. flags from flying above his temple. When he left us, he too had laid down a foundation of faith, like the bedrock of Jerusalem stone. Far Guide stayed with me on this trip, ‘not far away’ and gave vision and voice to the conflicts of the day. He was truly a man who spoke truth to power.

Near Guide and I&I had a date this year that took 40 years to arrive. When last we met, we were wearing mortar boards and gowns for our high school graduation. There’s a photo taken of us together, smiling among friends, ready to step into a Joycean world (framed for the likes of young artist, Stephen Daedalus):

Welcome O Life
We go to encounter for the millionth time
The reality of experience
And to forge in the smithy of our souls
The uncreated conscience of our race.

With this kind of chutzpah, I&I understands why it took 40 years to get my first date. So on this ‘trip’, we met in Jerusalem, where she lives and works and picked up talking, as if no time had passed between us. Over drinks and dinner, an old friend became a new friend and I&I could have stayed talking with her for days. For Near Guide, this was just another working day; tomorrow, she would be back at her job as a film archivist at Yad Vashem, the international Holocaust Memorial.

We tried to get to together a second time but plans didn’t quite work out. So, Near Guide stayed with me in spirit, as I&I ventured among the grave stories, preserved forever in the hallowed halls of Yad Vashem. From within these corridors of silent screams and murdered dreams, my words can add but little meaning. Once outside again, beneath sacred skies, where earth and air and sun survive, there are these words, Biblical words, carved in stone and much alive:

I will put my breath into you and you shall live again, and I will set you upon your own soil. – Ezekiel 37:14. 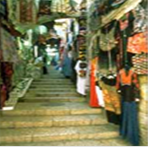 By day three of my journey, I&I set myself free of the spirit guides. At the Wailing Wall, a note to Lost Guide fit nicely into the cracks of the limestone blocks, which date back over 2000 years. A few words from the Kaddish prayer gave homage and remembrance to a soul who led me here. Far Guide’s farewell came down the cobbled streets of Old Jerusalem, thru the Damascus Gate and into the Arab Quarter, where I&I wandered with friends, past kiosks and apartments, past Stations of the Cross, to a storefront window where Yasser Arafat’s photograph was prominently displayed. This was the point where I&I must turn around. Far Guide had brought me face to face with a symbol of unrepentant hate and opposition to the Israel nation state: a reminder that this has always been a contested land of many peoples. Near Guide just texted my cell phone to say, ‘safe journey and send photos’. You are free to travel now.

In the days to follow, our band of wanderers roamed Israel by bus, meeting Arabs, Christians and Jews in the cities, homes and landmarks of the country. On the roads through the rich agricultural Jordan Valley, we came to a stop at the ruins of Beit She’an (City of Ivory), where I&I saw deeper into the rich history of the region.

With its fabulous biblical, Roman and Byzantine remains, the structures and artifacts of Beit She’an date back to the Chalcolithic era (4th century BCE), when the town was an important stop for caravans and a center of Egyptian rule. The layers of history come forward to the 20th century, when during the years of the British mandate in Israel (1917-1948), a team from the University of Pennsylvania excavated the site from the hills (or mound), referred to as a tel (an archaeological site). The history of Beit She’an reveals its inhabitants over 3000 years: Israelites, Canaanites, Assyrians, Persians, Greeks, Hasmoneans, Romans, Arabs, Crusaders, Mamelukes and Turks.1

“It was at nearby Mt. Gilboa that King Saul was wounded in an epic battle with the Philistines in the 10th century BCE. Rather than allow himself to be captured by the victorious Philistines, Saul chose to fall on his sword, after which, his body was impaled on the walls (I Samuel 31:9) of the city. They nailed Saul to the wall and as it is written, How far the mighty have fallen and the weapons of war perished! (II Samuel 1:27). Today, Beit She’an’s main street is named after the King.”2

In the 4 hectares that the city of Beit She’an covers, I&I strolled by the amphitheater, bathhouse, agora (marketplace), churches, mosaic-tiled artwork, statues and Roman colonnades. Adjacent to the ruins, we climbed an unexcavated tel  – the wanderers and I&I – a mound of history preserved intact for future discovery. In fact, we are told that hundreds of archaeological sites in the country remain untouched. This mound at Beit She’an reminds I&I that much history of the region, the country and my/our own inner space remains to be revealed. 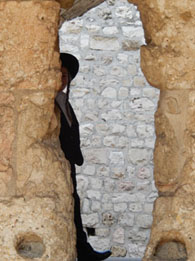 Truth be told, I&I took a trip this year and got stoned. The trip was to Jerusalem and the country of Israel. The stone was the marrow of antiquity in the living, breathing bedrock of ancient walls, the sanctity of hallowed halls and the shopping suqs of Arab malls. The buzz was a natural high and I&I’ is still making sense of it all. Like the archaeologists of these ancient lands, whose spades unearth the histories of millennial time, I&I, your narrator, still lives for the dig of the tel.