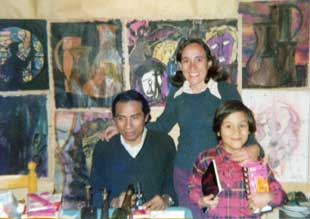 Fortunately, this psychodrama came to a merciful close. The love triangle between Grego and his amores (Belinda and Angelina) had been going on for years. This was just another episode of a Mexican soap opera, here in the neighborhood of Cerrada de Torreon. The evening melee was just a rite of passage and Wiley could now spend the night with his new acquaintances. In the weeks to follow, he was adopted into the Santillo family circle.

Grego and Angelina were graduate students in psychology and social work. He was also an artist, who painted, performed puppet theater and sang his own original music. Grego was the oldest of ten brothers and sisters. His father, as in so many broken homes, had long since fled to the States and, as a partly employed house painter, sent back to his family a stipend of $75 a month. Belinda, bless her soul, worked in Dr. Rocquet's Psychosinthesis clinic, the Albert Schweitzer Institute, where group therapy was guided with the use of indigenous psychedelic mushrooms and peyote harvested from the plants of the Sierra Madre Mountains.1

Despite their hardy spirit, talents and intellect, here in the mid-1970s, the Santillo family and friends lived in a constant state of fear and paranoia. Mexico City still lived in the shadow of the Tlateloco Square massacre of 1968 and the police state that had grown around daily life. During the 1960s, the international climate of student protest had spread to the capital city, where big money was building out the Olympic Games. The demands of students and political opposition came together for a rally in the central square.

Under orders from the government of Dias Ordaz, the army, commanded by Luis Echeverria, surrounded 10,000 demonstrators on the night of October 2, 1968. A group of soldiers from the Mexican Army called "Battalion Olympia" fired ruthlessly into the unarmed student protesters and kept shooting at people who let the students take shelter inside their homes. Dozens of students died in that protest and hundreds of people were disappeared into the Mexican prison system for several years.

Eight years after "La Noche Triste", the Sad Night of the Tlateloco Square massacre, the repercussions of political repression still hovered over the city. In the days that followed, Wiley followed Grego and Belinda through their daily lives. With Grego, he toured city prisons, where conversation and interviews were part of the research program. On weekends, Grego performed Punch and Judy puppet theater and Wiley enjoyed the shows, first as a spectator and later as a translator of the Punch and Judy scripts into English. In the evenings, they played more blues into the late night hours.