Beneath the snowy Spanish Peaks
The Huajatolla (Wahatoya) in native speak,
Our tale begins with Story Creek
The steady flow of words we speak

On 80 acres of grassy plains
Bluffs and hills and scrub emerge
We scratch the land, our lives converge
Outside the hamlet …

Back in the day, the world was headed for Hell and Marigold’s group household opted out of the chaos, buying 80 acres in southern Colorado, beyond the front-range growth surge we foresaw, even in 1978. Huerfano County had cheap land so, numerous hippie tribes settled there, in the footsteps of coal miners who came for the jobs and stayed to scratch out a living running cattle, selling real estate, motels and cafés catering to travelers.

Huerfano (meaning orphan) County’s Spanish Peaks, neither quite a fourteener but standing out from the Front Range (wa-ha-to-ya in the native tongue) were landmarks on the Santa Fe Trail. Population centers include county seat Walsenburg, sex-change capital Trinidad, Ludlow (as in Massacre), La Veta and a double handful of small dried-up towns scattered across the scrub oak and pinon of the hills and sagebrush of the high prairie.

Huerfano County has been home to the oldest Jewish congregation west of the Mississippi (which recently folded, selling their beloved Torah to, coincidentally, the temple that Fred and Marigold joined in Denver); to Drop City, Libre, Red Rocks and other hippie settlements; to neo-con retirees who, in 2016, turned the county Republican for the first time in its existence. There’s a struggling ski resort on the west side of West Spanish Peak, an opiates problem and history that looks a lot like poverty. 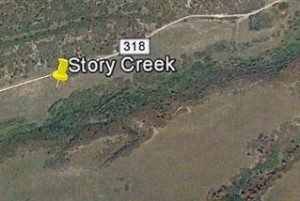 15 miles up a county road, with no electricity or running water, our dreams become projects. Build a cabin, string a fence, lay in a cistern. Pour concrete walls. Pour lots of concrete walls. Stand up a windmill, dig a trench, pump water up a mesa to tanks for gravity-fed irrigation systems. Fix a broken tractor. The entropy of the land: we’re always building, and things are always breaking down.

Under the direction of Randall Vision, we pound posts and string barbed wire to keep out the neighbor’s cattle. The small-batch cement mixer labors as we pour foundations and raise greenhouse walls. The cute little Kubota backhoe groans digging through hard dirt and harder rock on the hilltop, preparing holes for a pair of water storage tanks.

On a 105-degree morning we arrive at the cement-works yard in Pueblo, where the office manager shakes her head, “In seven years I’ve never seen a day when everything went right.”

But we buy two 500-gallon cisterns anyway. They’ll deliver them Friday … sort of: they unload them fifteen miles down the road from Story Creek. How we’re supposed to transport two large, heavy, fragile tanks from there never occurs to them. Several conversations and days later, they send the truck to bring them the rest of the way in, to the holes awaiting them.

The only way to get water from the pond to the tanks is to pump it but, we have no source of electricity. We acquire a windmill and Fred learns how to stand it up and mount the blades, balancing on the tiny platform twenty feet up, wrestling slabs of sharp tin into place then tightening the bolts so they’ll stay there. Once it’s up and running, the windmill’s a source of joy – lie in a hammock in the willows and watch it turn all afternoon. Gradually, the cisterns fill and water flows to the greenhouses.

Randall drives everyone hard, including the heavy equipment. Who’d have thought the skinny stumps of scrub oak would poke clear through tractor tires? Again and again? When the stubble punctures the first tractor tire, he puts on the spare. The rear tire is next to go, at which point, a 15-mile trip to town is in order. At Jolly Bonacelli’s tire repair store in Walsenburg, the heavy-set repairman does a belly flop onto the tire, tools in hand. Jolly Bonacelli and his very big belly. On the return trip to Story Creek, our pickup truck has a flat, just a tired tire. Three flats and you’re out for the day. 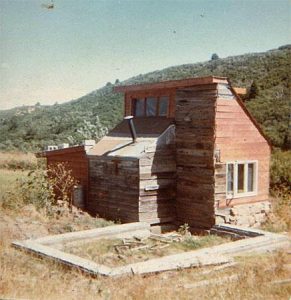 The only structure on the property when we acquire it is a low shed, used to store hay, protected from snow and wind. Raise the roof, add some walls, add more rooms – piece by piece it becomes a cabin. Fred and Marigold, dreaming of Rammed Earth, design the next addition, pouring a foundation then presenting plans to Frank Noga, the county engineer. He never heard of rammed earth – pipe clamps secure sturdy forms aligned 15″ apart, sprinkle in a moist blend of clay, sand and portland cement, then tamp it till it rings, hard packed. Keep adding earth-mix, keep tamping and the walls rise. With a “hat and shoes” – protective roof and foundation – a rammed-earth structure lasts centuries. Well, Frank Noga’s seen plenty of hippie shelters – our architectural drawings are a step above. He stamps his approval on the plans.

Friday afternoon work crew – Randall, Norm and Fred – watch the sun go down behind East Spanish Peak, no cement truck in sight. A race to the bottom of a Jack Daniels fifth is interrupted by the rumble of the mixer at 4pm, hours after everyone has given up on it. Oh shit! What are we going to do now? When the truck reaches our site, the tipsy crew goes to work. Fresh cement is delivered one wheelbarrow at a time. Try not to spill; this stuff is really heavy. 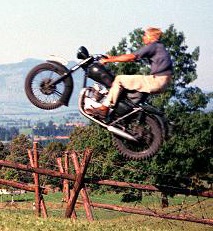 The Kawasaki 175 (Estrella model) is a sporty, temperamental motorcycle for riding the Story Creek back roads and making quick trips to town. One day, Fred takes it out for a spin. Wearing sunglasses plus a helmet with a smoky visor, he keeps fiddling to kick this sucker into third gear. As luck would have it, he notches third as he comes over a rise, revving up to 30 mph about the time he sees, about 40 feet away, a three-strand barbed wire gate closing the road. Steve McQueen in The Great Escape would have leaped gracefully over this barrier. Instead, Fred goes for Plan B: dropping the bike, sliding wheels-first into the obstacle to save himself from painful lacerations. Almost. His right hand on the handlebar finds some nasty barbed wire that slices a two-inch gash in his middle-finger knuckle.

Resourceful to a fault, Fred wraps his wound in a bandana, opens the gate, picks up the Kawasaki and drives 10 more miles into town, seeking ER medical relief. The nurse checks him in and parks him on a cot to wait for the doc when two cops bring in his new roommate, a psychobilly traumatized with a PCP psychosis, restrained by the sheriffs and howling to beat the band. Fun is where you find it – that’s Fred’s for the day. The docs stitch him up, he rides back to Story Creek and, to this day, keeps his middle-finger scar as a reminder.

Fast forward to the next century. Fred and Marigold, passing through Gardner, see a poster advertising Hippie Days – “Let’s go!”

They arrive armed with their copy of Shelter, a 1973 book about alternative structures, building materials and communities, a number of which grew up in Colorado in the 60s and 70s. The large-format, thoroughly illustrated book draws lots of interest. When Fred turns to the Red Rockers page, a woman stabs a finger at the group photo in front of the fifty-foot dome and exclaims, “That’s me! I was three. That girl next to me is a doctor with a degree from Harvard Medical School.”

Her friend looks over her shoulder as Fred identifies his cousin, David. “Didn’t he have a brother who was a junkie?”

Even in the 21st century, hippies are alive and well. Most communities are memories, evoking exasperation and fondness. “That dome was great for parties but it was a big noisy space – really hard to live in. In the summer, we lived in tents and tipis for privacy and sanity.”

Another onlooker remembers Archuleta, where some people lived in Zomes (domes made of aluminum sheeting). Libre is the only community still functioning. An artists’ colony, it sells work at a store in Walsenburg but mostly, the denizens keep to themselves.

Hippie Days shimmies in the sun to great music and belly dancers, with vendors selling vegetarian treats, books, handicrafts, original photos printed on greeting cards, rainbow tie-dyed t-shirts, wind chimes… All the people, even the sheriff’s deputies and the vaqueros, dance as the afternoon lengthens into evening, and No Bad Vibes rules the day.

Some folks can hang out for years, friendly but not too close. Not Marigold and Fred. Seven months into cohabitation, Huerfano County gives them a nudge. Four-day weekend: perfect for work and fun with the household crew. Last week’s snow has melted: perfect conditions for perfect mud, swallowing Fred’s car to its axles.

But Marigold has work the next morning, two hundred miles north. No way to tell her boss she can’t make it so, she grabs her pack, hikes up the road, hitchhikes into town then thumbs her way home, and gets to work on time. 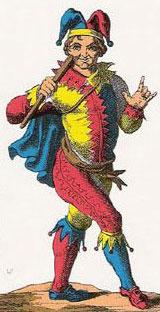 The next day, Fred wrestles his car out of the mud, driving home by way of the long-gone Red Rocks commune, the dome his cousin shared with thirty other hippies. Fred’s cousin, David, morphed into a film critic for Newsweek. The Red Rocker, Larry Lazlo, hangs his hat in here in Denver, with Co-Media Photography. His celebrity portraits grace Denver’s SIE Film Center today. Everybody starts somewhere.

The Fred and Marigold reunion occasions a hard look: what are we doing? Hanging out, it appears, does not equal “your problem is mine” loyalty. When opposites are in motion, they’re either in mutual orbit or flying off in separate directions. The Weak Force of “kinda-sorta-maybe” doesn’t hold.

So, our Fools must reflect, in the light of the Cosmic Beam:

A Foolish Day at the Court House

April 1st, 1981
Opposites drawn like magnetic poles
North and south at the county courthouse
Two fools collide and merge our souls
Writing a story, we find a spouse.

Meeting Judge Murr just before nine,
We say the words and swap the rings
Figuring it will turn out fine,
Like lots of other silly things. 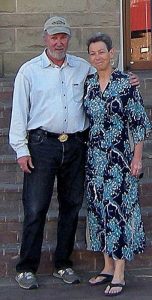 A dyad launched from the Alpha Motel,
Friends at our side who know us well;
A close-kept secret, intensely discussed
We tie the knot and the joke is on us.

one, two, three
one, two three
waltzing thru time
swing with the beat
kick up your feet

Beneath the snowy Spanish Peaks –
The Wahatoya in native speak –
Our tale now ends with Story Creek.
The steady flow of words we speak
On 80 acres of grassy plains,
Bluffs and hills and scrub emerge,
We scratch the land, our lives converge.
Outside the hamlet
– Waltsenburg Waltz

This entry was posted in Dreams and Schemes, Nostalgia, Stories, Stories and Songs, Travels and Adventures. Bookmark the permalink.