On the Back of a Grocery Sack

Fred got this crazy idea to build an outdoor bread oven from a sketch that Marcel had drawn on a shopping bag, during the 10pm break at the Longmont boulangerie. Boulangerie is French for bakery and that’s where Fred worked, with a crew of ‘oven loafers’, cranking out 3000 loaves of French bread each night.

Marcel, the head baker, managed this crew of ‘no-collar’ bakery bums. Their work ran from 8pm until 6am and most nights, the doughboys went through six or seven sprints to get the bread out. Marcel mixed the dough and filled 20 cabinets, ready for baking on each shift. There’s a bit of lingo to this process: French bread is laid on the ‘couche’, the baker’s linen proofing cloth and cabinets are filled with rising dough, waiting to be loaded onto ‘tappis’ (the oven trays). 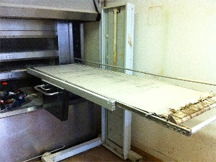 The art of baguette baking requires a special incision, a ‘coup de lame’, to create the traditional opening in the French bread loaves. So Fred and the bakery boys hunched over the loading tappis, razorblade in hand, slicing loaf after loaf to prepare the French bread. It was ‘slit, slit, slit’ all night long and the sandwich rolls also required endless scissor cuts to make the smaller pieces. ‘Snip, snip, snip.’

A fully-loaded oven held over 100 loaves, to be baked and steamed for that special baguette crust. After 15 minutes, the red hot baguettes were unloaded into wire baskets and wheeled to the packing crew in the back room, where the bread cooled in the night air before being put into sacks, grocery bags, then delivery trucks. Sometimes, the bakery boys strolled out for a smoke and a chat with the packers. This packing crew were the unskilled workers, who kept the party going all night with their noisy banter and boom box music blaring out the back doors of the boulangerie – any work was good work, and we took what we could get but B-b-b-baby – you ain’t seen nothing yet.

Sometimes the bakery boys went hunting for grasshoppers behind the building, to toss in the oven. They would count the grasshopper jumps before done. With a rag on a pole, they would sweep out the crispy crickets. Then the oven was ready. 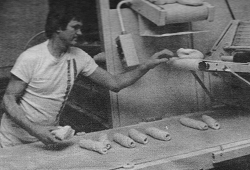 Marcel would have none of this fun. He was the one truly skilled worker in the bakery and Marcel preferred the solace of the break area to the banter of the packing room. And tonight, he shared his secret knowledge with Fred – the design of an outdoor bread oven, in the French country tradition, sketched on the back of a grocery sack. The wood stove oven he drew was simple in concept – a raised concrete foundation, lined with stone which supported a fire chamber for stoking the oven. A second platform supported the baking hearth and an arched brick kiln shaped the oven chamber. A stove-piped chimney finished Marcel’s drawing.

In the weeks that followed, Fred found a crew for the outdoor oven project in girlfriend, Fran and her machinist brother, Warren. Warren’s backyard, on a side street off East Colfax, would provide the ‘rural country setting’ for the construction site. After a couple of beers and some scoping of the task, they were off on a low-budget scavenger hunt. With Warren’s pickup truck, they spent a few weeks making the rounds from the industrial scrap yards of Commerce City, the brickyards of Denver and the creek beds of Boulder, to the country home of Fred and Fran, behind the IBM plant in west Boumont. For that rustic look, Fred and Warren scrounged for rocks near the entrance of Boulder Canyon. As they loaded the pickup with handsome, creek-washed stones, a homeowner shouted from across the way, “I pay taxes on those rocks. Put them back.”

With a smirk and a smile, the two thieves sped off with their building supplies. “These stones rock, Man. The Stones Rock!”

The fire chamber assembly began a few weeks later when Vinnie the Moocher showed up in Boumont, with a fifty-five gallon industrial chemical drum and his acetylene torch. After barbeque and beer, they got down to business. Inside the BBQ pit, Fran rinsed the barrel interior with gasoline to get rid of the toxic industrial residue. Imagine her surprise when the combination of the oil drums, gasoline and smoldering embers created a ball of fire that exploded in her face. Voilà – flamethrower. Luckily, only her eyebrows were toasted. A few beers later, Fred and Vinnie patched her up and proceeded to cut the barrel in half to ship down to the construction site.

By summer’s end, kiln bricks were gathered, an oven door was scrounged and shiny chimney stovepipes were secured. The masonry work proceeded in a slow and steady manner – foundation poured, rocks mortared at the base, the fire chamber secured, a baking platform laid in and the oven bricks carefully arched to match Marcel’s primitive drawing. They were ready to bake.

On a Friday night, late September, Warren tore out the walls of his attic as part of a remodeling project for his house. He started stoking the fire chamber early on Saturday morning and kept it burning for a few hours, waiting for Fran and Fred to arrive for baking day. The realization of the backyard bread oven – from Marcel’s grocery sack sketch, the scrounging of materials, the careful construction and masonry work – now was ready to be tested.

By 10am, the furnace chamber glowed a fiery orange but the oven temperature was only at 110° – far below the heat needed for baking. The layer of sand that surrounded the furnace had done an excellent job of trapping the heat and preventing it from rising to the baking chamber.

Ah but to quote the Scottish bard, Bobby Burns:

The best laid schemes o’ Mice an’ Men,
Gang aft agley,
An’ lea’e us nought but grief an’ pain,
For promis’d joy!

The stove-piped chimney worked very well. After several hours of furnace flames, the bread oven spewed a column of white smoke visible one mile down East Colfax, emanating from Warren’s backyard. When the Denver squad cars showed up, uniformed police and firemen confronted Warren in his living room.

“I don’t have to show you my driver’s license. I live here and I’m not driving a car.”

“Is your house on fire? Where’s that smoke coming from?”

Warren explained about the building permit and Fred just wondered, ‘What’s the problem? The Stones rock, man. Hey you, get off of my cloud.’

As Warren and Fred extinguished the flames, the authorities got back into their squad cars and fire trucks, disappearing as quickly as they had arrived.

Dreams that rise nightly in this bakery heat!

Fred put his feet up in the backyard and watched the circus wind down, drifting off to the revelry of another night shift at the boulangerie:

Dreams that rise nightly,
In this bakery heat,
Remind me of where I’d rather be.
Midst oven loads of steaming loaves,
I get these wild baguette visions
Glimpses of faraway places.

In the rows of fresh dough baking,
I see us loafing around
On a distant plane:
An African savannah, the Pampas
Or even the Great American Plains,
Stretched out in the high grass
Of a sun-searing afternoon.
Two creatures at rest,
Lion and lioness:
Me a lion in the sun
And you lying next to me.

Dreams like this I see rising nightly,
In the bakery heat.
Wild baguette visions,
Glimpses of faraway places,
Where I’d rather be. 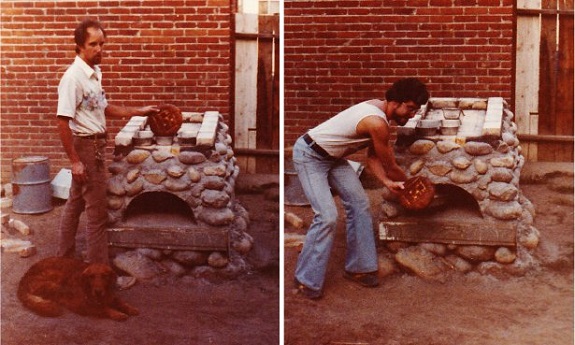 Postscript (Behind Every Cloud)

A few weeks later, Fred chaperoned a group of stoned hippies to the Rolling Stones’ Tattoo You concert at Folsom Field and rocked out to the show. The opening act was George (‘Bad to the Bone’) Thorogood and the Destroyers. The stadium smoked and did not burn down.

Warren kept the oven around as a monument for several years, giving guided tours and a hellacious re-telling of the ‘clouds over East Colfax’ yarn.

Fran and Fred have stayed Married Pranksters ever since then. Like Spencer Davis used to sing …