As Fred and Marigold entered this exotic vegetarian restaurant, with a party of twenty congregants from a Friday Shabbat service, the chatter of the ambient crowd drowned out the simplest conversation among the group. Putting small talk aside for a few minutes, Temple-goers found their place along the narrow, 30-foot table and settled in to greet those sitting, either across the table or at elbow distance to either side.

“Wheat grass cocktail, Hibiscus Kambucha on draft or kosher wine are available on the menu. Would you like to order drinks?” asked our waitress, Lisa. “I’ll be taking care of you.”

Fred’s stomach growled in defiance. “Give us a few minutes,” he said. “This selection will take some getting used to.”

His eyes reflexively squinted as he scanned the entrées list – Mesquite Tofu, Peppered Seitan Filet, Vegan Monti Pasta, Beet Risotto, Ginger Squash Bisque. Was this Mos Eisley’s New Age Saloon or was he just overreacting to the unfamiliar course offerings? No problem, at least he was getting served. The last time Marigold and Fred went out dining with the Shabbat Supper group, they ended up leaving the Third World African restaurant after two-and-a-half hours of delay, loud complaints and the eventuality of no dinner served. Tonight would be different.

Lisa returned to take their order and the gastronomic anxiety segued into sociable table talk.

Chuck chimed in, “The last time I ordered a wheat grass drink, I was working in Singapore. Not a bad experience, if you like mowed grass run through a blender.”

Lewis, the senior member of our group, waxed nostalgically for his days as Capital Hill’s pre-eminent barbecue king. “The BBQ business is just smoke, chill and reheat. I’ve pretty much given up on meat. After twenty-five years in the business, I don’t have a craving anymore. This menu looks OK to me.”

“What we really need,” says Mike, “are more latkes. I mean, more latke chefs for the holiday cook-off.”

Soon the group’s conversational chatter merged with the restaurant’s cacophony and they were relaxed, feeling at home in this trendy bistro. A friendly Jewish gathering and they continued meeting and greeting each other for the first time amid this crowd of vegetarian epicures.

“Histocompatibility is my specialty,” said Mike. “Robin and I moved out here, from Rochester, in ’97 so I could work in my field – matching bone marrow donors with transplant patients in need.”

“Singapore was great for a year,” says Chuck. “I’m an accountant and I worked for an international finance firm.”

“Since I retired,” said Lewis. “I’ve travelled quite a bit – trains, rental cars, trips to see relatives from coast to coast.”

They covered the election, photography (‘who really has the eyes’), retirement and a bit of Torah on the side. As meals arrived, conversations continued through delightful bites of nouveau veggie cuisine.

“Now about those latkes,” Mike pressed on. “Would Marigold be willing to volunteer for the cook-off? It’s not such a big deal. You just prepare 150 silver dollar-size servings, freeze them at home and bring them to the social in two weeks for the contest.”

As she weighed her options, Marigold hemmed and hawed. On the one hand, she loved to cook. On the other hand, Fred was the Jewish side of the dyad and she was not always comfortable as the outsider in the synagogues they belonged to.

“Let me think it over,” she said and soon, the evening meal passed on to the main event – Chocolate Mousse Cake with Black Raspberry Cabernet sauce. Yum. By the time dessert had finished Fred could see her resistance wearing down. He thought, ‘We have a new volunteer cook for the holiday social.’ With that, the meet, greet and eat dinner ended and a good time was had by all.

As Marigold and Fred drove home, he reminded her of his mother’s latke recipe, hidden somewhere on the cookbook shelf. Back in the kitchen, he found what they’d been looking for – the potato latke recipe on the back of the grease-stained, blue envelope of a company called FeathAire Aviation in North Glenn, Colorado. The latke ingredients were paired with a pot roast recipe (natch) passed downed in Fred’s family, hand-written and preserved in time. More to the point, this envelope dated back 30 years, to when the dyad were married and their friends, Gary and Rhonda gave Fred a free trial lesson on an UltraLite aircraft at Erie Airport. Marigold and Fred had been together for only eighteen months at the time and Fred remembered saying goodbye to her and their small son, as he went barnstorming across Colorado corn fields in search of death-defying, cheap thrills. It was great: finding that envelope preserved, the latke recipe intact, having mingled with the Shabbatons, and staying hitched to the girl he loved. 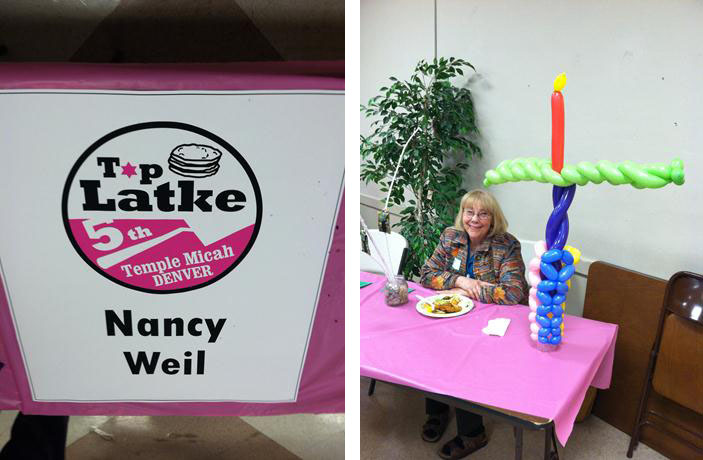