Not the Tiger A New Age Parable

Not the Tiger: A New Age Parable

“What I like about the New Age is how well it prepares us for the Old Age.” – Fred Driver (a golfing novice)

Over his years of shopping at New Age bookstores around the world, Fred built quite the collection of religious teachings, martial arts training guides, hip magazines, philosophic tracts and even a few posters of pin-ups in various poses of physical and spiritual ecstasy. Buried deep in his library of eastern religion writings and metaphysical tomes, one book has stood well the test of time – Zen Flesh, Zen Bones (1957) by the American author, Paul Reps, whose life-long study of Buddhism is presented in this book as 101 stories – parables if you will – espousing the secret knowledge of the Zen sages through the ages.

Foremost in the Zen Flesh book, is the 12th century story of the 10 Bulls – a commentary on the stages of awareness, leading to self-realization and enlightenment. The ‘bull’ of this Zen story represents the advanced state of spiritual awakening, described in a series of ‘self-help’ steps that would take Fred (or any other golfer) a few lifetimes to perform. In the interest of brevity, this step-by-step program is summarized here, for your edification and understanding:

Of course, missing in this self-awareness paradigm, is the theme of tonight’s spun yarn – ‘Shooting the Bull’, in which this itinerant storyteller has translated a few of these teachings into a modern sports story, involving celebrity, physical training, water hazards and a few broken ideas, which like shattered glass lie here in shards, to be re-assembled for the telling.

Imagine, if you will, that over the centuries of teaching, the meaning of the 10 Bulls story has survived as fundamental truth and wisdom. Tonight, we have merely transformed the persona of the Bull into a modern tabloid character (who exhibits certain animal traits). We call him ‘The Tiger’. 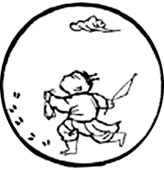 As a well-read boomer child, Fred first discovered the footprints of the modern Tiger in the high school reading of William Blake’s epic poem, Tiger, Tiger. Somewhere between pimples and unrequited teenage love, these classic words were first etched in his curious mind:

Tiger, tiger, burning bright
In the forests of the night,
What immortal hand or eye
Could frame thy fearful symmetry?

In what distant deeps or skies
Burnt the fire of thine eyes?
On what wings dare he aspire?
What the hand dare seize the fire? 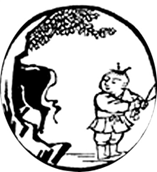 In the decades that followed, Fred spent years in the wilderness, seeking guidance before the Tiger appeared again. In the late 90s, he witnessed, through the media, the meteoric rise of Tiger Woods, golf champion, as he appeared on the covers of magazines, televised weekend golf tournaments, newspaper sports columns and the like. No fan of the golfing game, Fred still thought that Tiger made the sport fun to follow. After all, this golfing superstar was exciting to watch and broke nearly every record in the book: winning four Masters tournaments from ’97 to ’05; winning consecutively, all four major golfing titles and beating nearly every competitor by a wide margin. Clearly, Tiger far out-classed the field.

Coincidentally, this is when Fred decided on Lasik surgery. To a humble seeker of truth, it seemed like destiny when Fred found a special clinic to improve his eyesight. There, in his doctor’s Maryland suburban office, Fred saw the photo endorsement of Tiger Woods and the Vision Center doctor who performed the operation. As the 10 Bulls teaching instructs, Fred was ‘perceiving the Tiger’ right before his eyes. Thankfully, the procedure went well and in his exit interview, Fred asked Dr. Steiner for the naked truth.

“Say, your clinic performed Tiger’s operation, right? So, will I golf that well when I recover in a few weeks? You know, improve my handicap so to speak?”

“Fred,” the Doc weighed in, “not if you didn’t golf that well before you came here. But your handicap will improve. We’ve given you perfect eyesight.”

“Let me try another angle,” Fred pleaded. “Have you ever thought of adding a psychologist to your staff? You know, for out-patient counseling?”

“I’m not sure I understand,” Doc Steiner replied.

“It’s simple,” said Fred “and you could make a ton of money. Guys like me, we’ve been near blind our whole life and now that you’ve given me 20-20 vision and a glimpse of the Tiger, I can clearly see that this world is much more screwed up than I’d ever seen before. A psychologist could really help a patient like me.”

“Let me get back to you on that,” said Doc Steiner.

Fred sighed, thanked the Doc and the staff and strolled out the door, back into the wilderness. 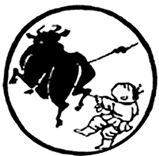 When, years later, the tabloids struck, the fate of Tiger fell far from fame and sports adulation. It might be said that bad publicity and self-inflicted damage had a Tiger by the tale (of infidelity and scandal):

Tiger, tiger, burning bright
In the brake lights of the night,
What immoral hand on thigh
Could frame thy lack of alibi?

In what fancy place did thy
Catch the cocktail waitress’ eye?
On what hope did you desire
To mulligan your mad wife’s ire?

And what shoulder and what friend,
Will comfort you while on the mend?
And when golf season calls your name,
Will you ride a cart of shame?1

Fred cared little for this media frenzy and forgot the passing interest he once had in Tiger’s game. One day, at a business lunch in suburban Virginia, Fred was surprised when a colleague ordered an ‘Arnold Palmer’ drink from the lunch menu.

“Never heard of an ‘Arnold Palmer’. What’s in the drink?” Fred asked.

“I see,” Fred said. “Sounds awful. Think I’ll order a ‘Tiger Woods’. You know – you get twelve ice teas but you only have one skinny little straw.” 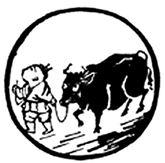 In the year of his 60th birthday, Fred was gifted a hat from his son on Father’s Day. He wore it proudly in the weeks that followed, until a tennis partner asked him, “What’s with the golfing hat, Tiger?”

That’s when he noticed the TW insignia, emblematic of the Tiger Woods sporting logo. Fred realized that it must be time to tame the inner Tiger, or else, maybe to start playing golf. Soon after, Fred entered his first 9-hole charity golf tournament for Temple Chaim. In that golf game, he spent more time unearthing ‘divots’ than putting the ball in the cup. On the final hole, 170 yards, dogleg right, Fred drove a tee shot with such strength that it caromed off the apartment building adjoining the golf course. Next year he vowed to improve.

In the months ahead, Fred bought a set of practice clubs and on several occasions, went to the nearby driving range to figure out the golf swing thing. Fred could drive the ball well but he had no idea what the irons were all about (driving, pitching, etc). On these practice outings, he mostly learned that a golf glove is required to keep his hand from blistering when swinging the clubs. 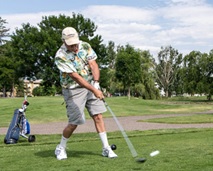 At the second year’s charity tournament, Fred’s golf game picked up a bit. He missed the water hazards, sunk a few puts, made a few pars and got himself pictured in a classic looking tee shot. Unfortunately, without any golf shoes (cleats)! Fred followed through the photo-op by going bottoms up and finished the swing lying on his back with his feet in the air! Good photo though. Next year, he vowed to improve.

Leading up to the third year’s Temple Chaim charity golf event, Fred kept up his infrequent practice at the driving range and bought some cheap golf shoes to keep his feet planted. Last summer, he put the new equipment to the test. The first three holes were typical play: the golf ball seemed to always know where the water hazards were and Fred took a six on each hole. Then, he peaked for a few holes with a couple of pars and a 20-foot putt! Things were looking up.

Unfortunately, inertia soon took over and for the next several holes, Fred went back to his miserable game. And then came the finale. He was back at Windrows Emerald Greens hole 6, par 4, dogleg right, where he had finished the first year’s tourney with a bounder off the building. This time would be different. If Fred shot anything below a six, he would leave the course a happy camper (and much improved golfer). Head down with nerves steady, Fred concentrated hard on the tee shot, using his best Zen Mind and Tiger prowess (see the ball, hit the ball). Using his #3 driver, Fred executed a perfect back-swing and met the ball square, sending the dimpled golf ball flying 200 yard through the air, over the 40-foot fir tree and into a perfect hole-in-one! Hole in one window that is.

Crash … tinkle tinkle tinkle. Fred and his golfing partners could hear the resounding impact of the shattering window all the way back at the tee area. In their fourth story apartment, Mr and Mrs Corrales had a rude awakening when the speeding golf ball broke through a small decorative window, adding new ventilation to their humble abode. No worries, it had happened before.

At the Windrows Emerald’s Greens, the architects designed a course complete with water hazards, sand traps and window pane targets for the residents living adjacent to the fairways. Fred, the Tiger, had found the bull’s eye.

At the end of the course, Fred had some big stories to tell back at the clubhouse. He hung up his cleats, downed a few drinks and spun this new yarn for his golf buddies to hear:

Tiger, tiger ball in flight
Down the fairway, out of sight.
Arcing high above the trees,
Hit with grace from yonder tee.

To reach the green on such a drive
Would be the dream of man alive.
If only true or yet begun
The ball should land a hole in one!

What the glory, what the sound,
The crowd will roar and cheers abound,
When through the air, thy ball shall fly
To break a window way up high?

Crash and shatter, smash the glass,
200 yards down fairway grass.
Applause recedes and stares go round;
You’ve reached your peak, a golfing clown!

Next year, he vowed to improve. 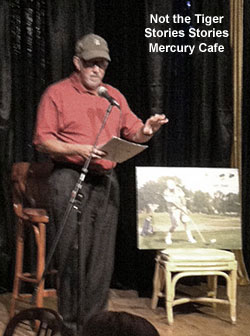