(for Maurice, Ray and Stan)

Prelude: This narrative came to me on the occasion of a root canal. The good news – it was only the tooth that died.

Let us expand our field of vision, past the end of the nose, over the rim of the eyeglasses and gaze out beyond the horizon, using a parallax field of vision, to observe a writer’s life from two different lines of sight – the words, the body of work and the never-ending changes of the natural world.

In memory of three great men – Maurice, Ray and Stan – I ask you, dear reader/listener to consider this idea of Synchronicity: the experience of two or more events that are meaningfully, though not causally related. For the final story of these men, let us examine some related coincidences of nature when their last chapter was written.

No, this is not The Twilight Zone; it is The Wake of the Flood.

In the early Fall, before the Colorado floods stole the headlines, Marigold and Fred spent a beautiful weekend in Stan and Ginny’s mountain cabin. On that getaway trip, they hiked a six-mile trail to a high mountain lake and caught cutthroat trout in the alpine waters of Rocky Mountain National Park.

Their excitement was short-lived that day. The quick hit of a native trout on the line and the sight of the red-and-silvery cutthroat jumping out of the lake; this thrill was cut short by the storm clouds rolling in and the hikers had to leave too early, to hike safely back down the trail. That’s when the deluge started – 90 minutes of high mountain rain showers, accompanied by the flashes of lightning and syncopated with thunderclaps to literally scare the daylights out of these two intrepid hikers. At the end of the trail, Fred was completely drenched, soaked through his Gortex windbreaker, suffering over-exposure from the cold and the rain. Not to worry. As they drove back to the mountain cabin, Marigold and Fred talked about the thrill of a cutthroat trout on the line.

Next day, they drove back from the mountains, on the Jamestown road, gazing at the town they had not seen in 30 years. Such a beautiful place, not quite ready for the floods that would soon change the landscape forever. In the weeks that followed, epic Colorado floods washed down from the Rockies, out the Platte River to the Nebraska plains. Towns and roads and lives disappeared and, in the wake of the flood, our dear friend Stanley passed quietly from this earth.

The Old Man of the Mountain 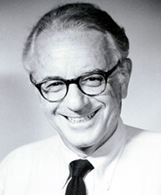 Maurice Rapf (or Uncle Maury to us kids) was the real deal in the business of writing. On the occasion of the 50th anniversary of the Dartmouth Film School – a program that he helped establish – the school’s Film Society paid tribute to Maurice, his life in the movie business and his solid commitment in teaching film courses at Dartmouth for over 40 years.

Maurice was the scion of the 1930s MGM studio era: the first son of a movie producer; a lad whose childhood included free run of the Hollywood back lots in that golden era of film. He developed into a screenwriter and is historically remembered for his contributions to Disney’s classic film – The Song of the South. He worked on that script and, to his dying day, regretted the racial stereotypes portrayed in the film.

Among his friends, colleagues and classmates were the writers, Buck Henry, Budd Shulberg and Ring Lardner (to drop a literary name or two). Here are a few more biographic details. In the 1950s McCarthy era, Maurice was blacklisted from Hollywood and the film industry for his political ideas. In the mid-50s, he packed his family up and moved back to NYC, later migrating to Vermont, where he then began his teaching career at Dartmouth. In June of 1968, Maurice reviewed the movie, 2001 for LIFE magazine. He saw the future (and wrote about it).

When Maurice died in 2003, a geologic landmark of New England fell with him. The granite formation, known as The Old Man of the Mountain, collapsed in the months that followed his death. These cliffs are still today the emblem of the 25 cent piece for the state of New Hampshire. And when Maurice passed on, the hills came a tumbling down.

His allegorical epitaph may have been these words, spoken by the New England statesman, Daniel Webster, “Men hang out their signs indicative of their respective trades: shoemakers hang out a gigantic shoe; jewellers a monster watch and the dentist hangs out a gold tooth but up in the Mountains of New Hampshire, God Almighty has hung out a sign to show that there, He makes men.”

For many years, Ray Bradbury’s stories have nourished my love of science fiction, space exploration and futurism. Just a few of my favorites are three gems:

The Veldt is a short story written by Ray Bradbury that was published originally as The World the Children Made, in the September 1950 issue of The Saturday Evening Post, later republished in the anthology, The Illustrated Man, in 1951. In this story, the parents are devoured by lions in the jungle Savannah room created by their children.

The Laurel and Hardy Love Affair tells the tale of two elderly spinsters, listening to the oafish sounds of Stan and Ollie moving a piano out for their Pasadena neighborhood.

In The Kilimanjaro Device (first published in LIFE magazine, January 1965), Ray Bradbury has a magic jeep, driving near Ketchum, Idaho, coming upon Ernest Hemingway and offering him a better alternative to the writer’s tragic end of his depression and suicide. Instead, Hemingway dies glamorously in an airplane crash into 19,340 foot Mt. Kilimanjaro, in tribute to his most famous short story.

Did you know that Bradbury was interested in civic planning? When my grandfather, David Tannenbaum, served as Mayor of Beverly Hills (1956), a monument (Celluloid) was erected, dedicated to the film industry and honoring his promotion of the motion picture business with the city. Here is what Ray Bradbury had to say (Too Soon From the Cave Too Far From the Stars – A New Millennium Revelation, 1989):

“At the corner of Beverly Drive and Olympic in Beverly Hills stands a bronze monument: a 20 foot tall film scroll, up-flung to the sky. At its base, in bas-relief, stand vivid portraits of some of the stars who created Beverly Hills: Mary Pickford, Douglas Fairbanks, Tom Mix, Rudolph Valentino, Harold Lloyd and Will Rogers. How do you revamp Hollywood and Vine? … What if we re-created a similar upthrust pylon … but 50 foot tall, panoplied in gold, with the bas-reliefs of others who created the Hollywood image? A competition, perhaps, to recall the famous at the center of our lives, with the endlessly unwinding ribbon of film, it has to make it seem endlessly in motion, rising, to vanish in the stars. With that grand reel of film flung to unspool itself in the heavens, wouldn’t the world’s tourists, arriving, shout, ‘Yeah! Hollywood and Vine, by God. At long last! Hollywood and Vine.’ Imitation is the sincerest form of flattery.”

But I do digress. Let’s go back to the Synchronicity theme – Ray Bradbury and the Transit of Venus (an Internet commentary). Bradbury’s stories inspired scientists. Science then killed the myths he told. Yet his stories live on, embodied yet not present on a small black dot, twin to our fragile and transitory home. Sic transit omnia. Sed verba perdurant. 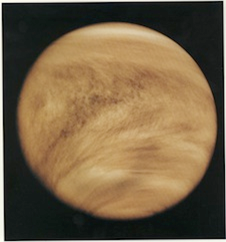 “It had been raining for seven years; thousands upon thousands of days compounded and filled from one end to the other with rain, with the drum and gush of water, with the sweet crystal fall of showers and the concussion of storms so heavy they were tidal waves come over the islands. A thousand forests had been crushed under the rain and grown up a thousand times to be crushed again. And this was the way life was forever on the planet Venus, and this was the schoolroom of the children of the rocket men and women who had come to a raining world to set up civilization and live out their lives.”

So wrote Ray Bradbury of Venus in 1954, in a heartbreaking yet beautiful short story. In that tale, Venus’ clouds thin once every seven years, just enough for the sun to break through for about an hour. The native schoolchildren tease one Earth-born classmate, who remembers and yearns for the sun. They lock her in a closet as a prank, when the magic hour approaches. The precious sun has come and gone and, because of their despicable act, Margot has missed it. They walk slowly and silently towards the closet, and let her out.

This story is about Venus and the Sun. Coincidentally, author Ray Bradbury himself died the same day as a very rare celestial event, a transit of Venus across the Sun. [See Martian Author Dies During Venus Transit].

As I have given you a glimpse of Bradbury’s stories, Maurice’s writing life, this tribute to Stan must mention the mountains.

Stan maintained a lifelong interest in mountains, especially those in Colorado. He was a life member of both the Colorado Mountain Club and the American Alpine Club. He frequently led hiking, climbing and cross-country ski trips for the Boulder Group of the Colorado Mountain Club. He wrote an unpublished mountaineering book in his twenties, when not many had taken to the mountains or knew what they were doing. He composed poems (The World at Our Feet) throughout his life. A compilation of his poems will soon be printed.

Some memories of Stan’s mountaineering legacy are given here:

“The original motivation for starting the Mountain Club [now known as the Climbing Association of Colorado College] was to get access to women. All these GIs were coming back from World War II, and those guys had plenty of money and nice places to live. We couldn’t compete with that, but we figured out that some of the girls wanted to learn how to rock climb. That’s how I met my wife, Virginia. I was her rock-climbing instructor.” – Stanley Boucher

Climbing History in Garden of the Gods

The Garden is one of the oldest established climbing areas in the United States. Albert Ellingwood, a Rhodes Scholar and Colorado College Professor, was the first person to climb technical routes in the park. Many of his classic routes from the 1920s are still climbed today, using vastly different gear! Later, in the 1940s, Vernon Twombly and Stanley Boucher put up several more classics, including the Practice Slab on South Gateway. 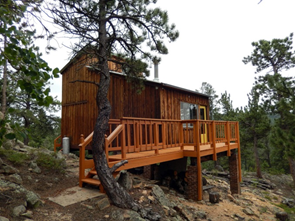 “Seen from outer space, the earth would appear a perfect sphere. But it is not. Its land surfaces have many bumps and wrinkles, some of which, seen on a human scale, rise to enormous heights. The highest of all is known as Mount Everest to most of the world and Chomolunga (Goddess Mother of the World) to the peoples who have dwelt at its base for centuries. … But Everest is still Everest – the highest Mountain with the thinnest air, some of the most prodigious winds, snowfields known to avalanche and ice falls replete with hidden dangers. It is a mountain that can, when it wishes, protect itself very well.”

And when Stan died, the mountains cried. And this is the Wake of the Flood. 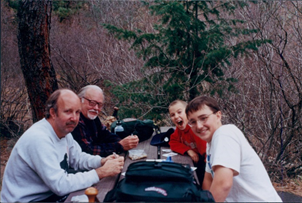