Down the Paw Paw without My Ma-Ma

Down the Paw Paw without My Ma-Ma

About the Paw Paw Tunnel 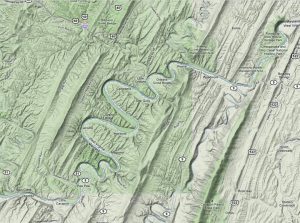 The Paw Paw Tunnel is a 3,118-foot long canal tunnel on the Chesapeake and Ohio Canal. Located near Paw Paw, West Virginia, it was built to bypass the bends – a sinuous stretch of the Potomac River. While the river makes a series of gargantuan loops, the tunnel route cutting across one large double loop is much more direct and was conceived to improve the flow of commerce on the canal. The town, the river bends and the tunnel take their name from the pawpaw trees that grow throughout the area.

Construction on the tunnel began in 1836 but the construction company seriously underestimated the difficulty of the job. Violence frequently broke out between various gangs of immigrant laborers of different ethnicities and wages were often unpaid, due to the company’s financial problems. The tunnel took 14 years to complete; a delay that doomed the canal to obsolescence (in favor of the railroad). Even so, it ranks among the world’s longest canal tunnels and is one of the greatest engineering feats of its day.

The Potomac River and the C&O Canal are perfect destinations for a rambunctious group of boy scouts. In the summer of ’96, we sponsored a service project along this section of the tow path. Scouts, riding in the back of a few pickup trucks, spent a warm day in June cutting overhanging tree branches along a few miles of the canal towpath. We filled trucks with the downed limbs and were rewarded with service pins by the local park ranger.

With this pleasant outing in mind, it seemed like a ‘no-brainer’ when our Scoutmaster brought us back, in August, for a leisurely inner-tube ride down this stretch of the meandering river. On a sunny afternoon, 11 scouts and three adult leaders (one of whom spoke only French) dropped into the Potomac on the West Virginia shore. The three other adults met them for lunch on the Maryland side of the river, fed them all and wished them ‘happy trails’ on their float down the Potomac, to the take out point downstream. We ‘leaders of the pack’ hiked a mile or two down the canal towpath and waited on the sunny rocks, expecting the lads in a couple of hours.

The plan seemed basic but as the saying goes, If you make a plan idiot proof, the world will invent a better idiot to carry it out. In this case, everyone involved qualified. With six adult leaders (Neal, Pierre, Steve, Claude, Peter and Tim) in charge, no one seemed to remember the map.

Wading in the Water

Late in the day, we waiting adults spotted a group of canoers camping on a sandy beach, not far from our vantage point. Wading through the Potomac in chest-high water, I ventured over to ask about our flotilla of scouts.

“How was that possible?” I asked. “They put in the river about one o’clock today.”

“Mister, we started at 11 am and it took us over five hours, paddling down six miles of river that snakes through five horseshoe bends. With no wind and slow current, they might not arrive until nightfall.”

As we later learned, most of the day was spent in a rowdy ride down the river. Head plunging, tube flipping, and getting caught in rapids were all in the day’s fun. Some scouts saw bald eagles soaring in the skies. Other lads lost shoes, drifted off from the group and lost sight of Neal, Steve and Pierre, the three adult leaders (one of whom spoke only French).

Late in the day, those of us at the ‘takeout spot’ put Plan B into action. Claude headed back to his car for a flashlight, while Peter and I shouted to a fisherman on the opposite shore. This man agreed to drive up the far side of the river and came back with a report of some kids upstream.

“Couple of them are walking with inner tubes thru the woods,” he shouted back.

It was getting dark as Alex and Alex, the first batch of scouts arrived: two water-soaked lads, shirtless and shivering, one without shoes. Soon after, came a group of outward bound canoers, who had also seen the tubers in disarray. Clearly, ‘the tofu was hitting.’ The outward bound cohort agreed to look out for the ‘river rats’, while I walked back, barefoot on the loose gravel path (having lent my tennies to the shoeless Alex). My other adult guides, Peter and Claude, stayed close at hand. The plan was for these two men to drive to the West Virginia side of the river, while I tended to the shivering lads.

Back at the parking lot, we met another group of young adults, who called themselves The Delta Patrol. Assessing our plight, they volunteered to walk down to the ‘takeout point’ and assist with the waterlogged river rats. As they marched off, I asked their adult supervisor, “What is a Delta Patrol?”

He explained that they were a weekend workforce from the Maryland Detention Center. Egads!

I see a Full Moon Rising.
I see trouble on the Run.
The two-hour trip we had planned for,
A five-hour nightmare had become.

The Scoutmaster was right,
We’ll need a few flashlights:
We’ll be searching thru the night.

Meanwhile, on the river, some scouts did the first thing any arrogant teenager does in a moment of stress – blame the grown-ups. One group had left the river with the three adult leaders (Neal, Steve and Pierre) and found their way to a trailer park/hunting camp of West Virginian locals. Another group of lost boys left the river and arrived at a railway trestle at dusk. Wet, scared and uncertain, they carried their inner tubes thru the railway tunnel and, by the grace of God, arrived at the West Virginian’s compound.

At this point, two scouts (Alex and Alex) remained unaccounted for and Neal, (the one adult leader who didn’t speak French) headed into town in a West Virginia pickup to call for emergency response. To his surprise, when Neal got to his car, he found it locked – not the way he had left it earlier in the day. After he called a locksmith, who jimmied open the door, Neal was again astounded to find his car keys were missing – not where he had left them earlier in the day. Shouting and male bonding ensued. Even the Scout Leader was lost at this point.

Back at the hunting hideaway, nine scouts were looked after by a drunk (out of uniform) state trooper, who was hiding from his ex-wife and kept watch while the Assistant Scout Master was attending to his locked car. The scouts soon learned that another of the trailer park denizens was something of a gun nut. He was showing off his favorite toy: a 30-06 semi-automatic rifle which normally uses a 10-cartridge clip. This guy had rigged up the weapon to hold extra rounds; so if he ever had to defend himself from the Feds, they would think he was out of ammo when he still had a few shots left in the clip. He let the lads know that he could hit a deer in the dark across the river. The lost boys had wandered into an alternative universe.

Without neither keys nor car, Neal arrived back at the trailer compound, where the conversation had turned to the other lost boys (Alex and Alex) and a decision was in the works to call a rescue helicopter to search the river. About this time, the Fisherman (remember him?) arrived and reported that the missing lads had been pulled out from the Maryland side of the river. Soon after, the other adult leaders (Claude and Peter) appeared and the whole adventure began winding down. At nine o’clock at night, the lost boys were found. Back in the parking lot, safe with Alex and Alex, I was saying my prayers and practising the deposition I would be giving in court.

The Scoutmaster was right;
We’ll need a few flashlights.
We kept searching thru the night.

At our campground that night, male-bonding ensued – again. Over the years, this story has been told and re-told as a cautionary tale for future generations: what not to do in the great outdoors. A little preparation (and some good map reading skills) would have saved the day. Years later, four of the lost boys would go on to earn their Eagle Scout rank. I offer this story and one more song verse for them:

A Tribute to John Fogerty

Just a few weeks ago,
We went out for some fun.
Troop 33 went tubing
A Potomac River Run.

‘We’ll see you around the corner,’
They cried.
‘Just around the Bend.’
Oh Lord,
We lost the boy scouts again! 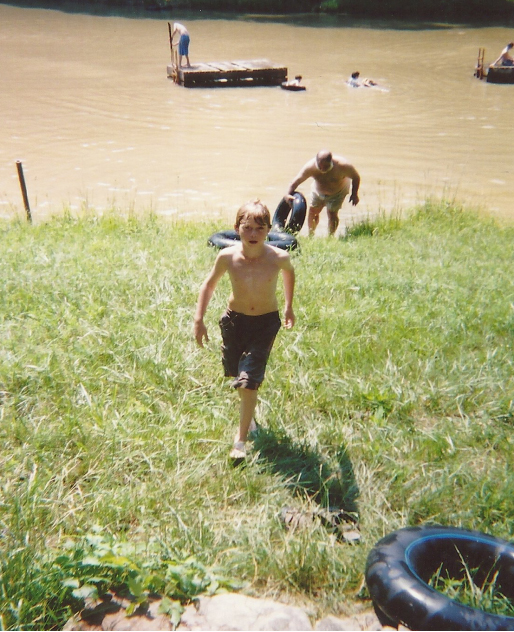