What should we be without the sexual myth,
The human reverie or poem of death?
Castratos of moon-mash – Life consists
Of propositions about life.

– Wallace Stevens, Men Made Out of Words 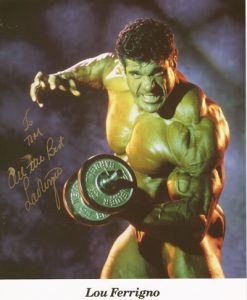 Halloween night, 1977. Jay, the body-building manager of Main Street’s Wildflour Pizza Parlour, announces to us, pizza-slinging doughboys, that his friend from the gym will be stopping by later this evening. It seems that this guy from Joe Gold’s World Gym, named Lou, was looking to get out with the spooks and the crazies. To thicken the plot, Jay’s tip is overheard by the drag queen manager of a neighborhood cabaret, a fellow decked out in a wig, brassiere and fishnet stockings, who had just stopped by the Wildflour to make change from our cash drawer. On the lookout for excitement, this fairy tale barfly exhorts Jay to bring Lou by the club.

So, as time slides by into the late goblin hours, this guy, Lou, appears in his extra-gantageous self and asks for dinner in ‘the usual way’ (antipasto salad, no olives). He turns one ear to the dining room crowd and chats to Jay and us cooks.

While Jay and Lou discuss the night’s misadventures with the bizarre ambience of the gay crowd across the street, I hang up my apron, wash, and get ready to leave.

“Hey guy,” the big boys call. “Are you looking for a wild time. Want to join as for this Halloween party?”

Maybe I see you later, Lou – in the car I drive, the fan mags I collect, or event in person, Lou. Maybe I’ll see you later.

It was a cold night in November ’78 when the Bondo Bus died. From infancy, when the disabled 1967 Ford Econoline van hobbled into its stall for repair, through the engine rebuilding, paint stripping, interior transformation that made this junker into a mean machine. Across the Arizona desert for a Thanksgiving test drive resulting in the thrown-rod disaster, only to rise like a Phoenix from the ash tray to launch the 5000 mile adventure of my youth – across the continent (with girlfriend, dog and guitar). In spite of the flat tires, electric failures and dissolution of the romance, it took only 5 seconds to thoroughly demolish the car.

For the final 100 feet, the Bondo Bus slid down the icy road until the ass-end of a Boulder city bus totaled us cold. Obscenities, fear, impact, shock, each reaction following the next in nerve-wracking fashion. I have been through this sequence before – the split second death of a dream made ever-so-real by the sound of breaking glass, mangled steel and before my eyes, the snapshot of the front passenger seat disappearing in the instant of collision. After the shattered windshields are swept away, tow trucks arrive and the police reports taken. All parties disperse. I’m off in search of a hamburger and the solitude of Andrew’s office.

Once the shock wears off and a few days pass, all things aside, I’m still in need of a car. The contemplation of these few days produces some great results – I’ve hocked my father’s life insurance policy for some quick cash, reconsidered my inadequate winter driving skills and found a bargain on a ’73 Dodge Swinger with 3-on-the-tree and a hefty V-8.

The salesman at Broomfield Rentacar sealed the deal on this car – “It’s a dinosaur. If someone hits you, it’s their problem.”

The car reminds me of my friend, Lou. Later on, I would cut out a photo of the Hulk and paste this image to the headliner interior roof – an image of strength and invincibility. Little did I know, I would need his help yet again.

On a sub-zero day on a lonesome country road, the second accident came a year later. As I turned into the driveway, I hadn’t seen the speeding motorist approaching on the ice slick road. Here’s my incident report:

Know why I’m crying?
My car’s twisted iron.
Got a fender that looks like a crushed cola can.
Smacked a Honda Accord right in front of my door.
Now it’s a Honda Accordian.

Unlike the first accident, I was just lucky enough to survive the second crash with a minimum of bills and bruises. Lou rebounded from the hit and soon after, we were wheeling around on the Colorado highways once again. I felt safer now, experiencing the resurrection and freedom from another automobile demolition. Little did I expect that a reunion with my celebrity friend was right around the corner.

Close Encounters of the Safeway Kind

Well if that don’t beat all! A few months later, there you are, Lou, in the Sunday newspaper, looking good as ever and making a local appearance right here in town – “Come out and meet Lou (The Hulk) Ferrigno and sample his new nutritional snack bars – next Tuesday at the Boulder Safeway.”

Are you coming back to see me and your namesake on wheels? Was there something we forgot to discuss back on that Halloween night? My friends at the bakery will never believe this story. Like I always tell them, ‘I could have been somebody. I could have been a contender.’

After work, on the day of this promotional event, my buddy David and I hopped into the Swinger (Lou) and headed over to the Safeway to meet the spirit of my car in person. Hey big guy – I see you in the crowd signing autographs and looking massive as ever. Your bicep bursting body sits poised at the display table surrounded by candy bars, body-building books and a couple of two-bit, polyester types hovering suspiciously behind, monitoring for crowd control I think. Who are deez guys – Superfly hustlers trying to pay the rent with your name? Lou don’t need no bodyguards!

In my car, in my mind and in my words, Lou is something bigger than life. That’s why I’m here today with the admiring public and children chasing autographs. Your persona, Lou, rides with me on the highways like a modern Saint Christopher, protecting this wayward driver from another fender bender. Your presence inspires the quiet strength of imagination, which guards me daily ever since that thread of conversation in a pizza parlour, on Halloween many years ago. Whether he knows it or not, Lou occupies that place in me where the strength of imagination, the power of the creative will, tempers all that revolves around this crazy world in the chaos of my own mundane existence. And here you are now, in the supermarket, selling health food bars. Wow! In a flash, I intrude this promotional stunt and say, “Excuse me, Mr. Ferrigno, remember me? I used to make pizzas at the Wildflour.”

Nervously I pause, fearful that he may have forgotten our meaningful encounter. The Polyester Man casts a baleful look in my direction, as if he were about to disassemble my frame in a moment’s notice.

Lou gazed up from his work, blinked an eye and said, “You mean Jay, Steve and his wife uh …”

“Wendy,” I say, prompting his memory at last.

“Yeah, I remember you. What are you doing here?” he asks as if he does not perceive the chrono-synclastic nature of this reunion.

“I live here, Lou. I’m married and live outside of town.”

And now, in a flash, he begins to understand. “Hey, you’re the guy that used to make the antipasto, right?” 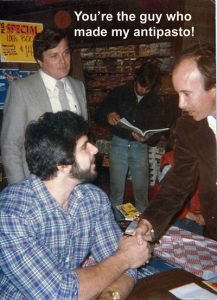 In that instant, he stands up, putting aside this supermarket scene for the candy bar firm. He turns to the passers-by to announce, once again, “Hey everybody – this is the guy who used to make me antipasto!”

No one seems to notice, but I stand in Lou’s shadow, too humble for words. My friend, David, snaps a fews photos. I thank Lou and we leave, taking with me an autograph, a box of health food bars and a taste of that indestructible presence of Mind Out of Time. That evening, I ate a half-dozen of the Go-rilla protein bars and in my dream, I am transported to some new power spot of the universe. I am wretched sick for the next few days and in my enfeebled state, arrive at the moral conclusions to this story –

Taste the power of imagination but
Don’t bite off more than Lou can chew.
It’s not easy being Green! 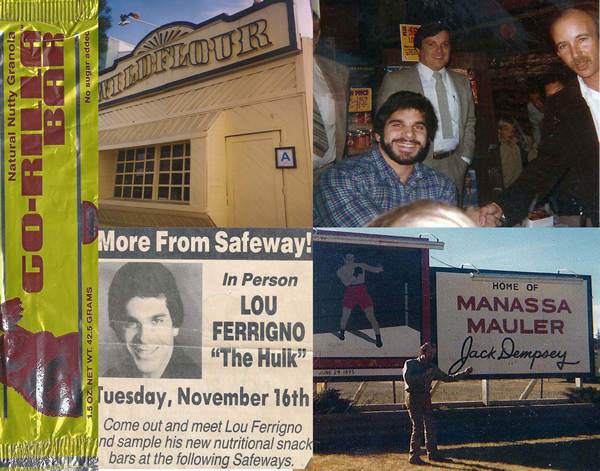