Kind of Fonda Henry:
A Punk Epiphany (and the Law of the West) 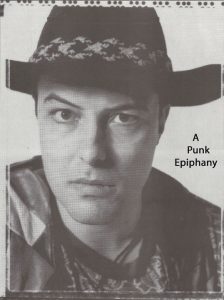 With these thoughts in tow, I pull into a Mickey D’s parking lot in search of some quick McFood. Slipping through the swelling lunchtime crowd, I mumble an order to the food droids and glance around, people-watching, here in this fast food joint. Soon, a gaggle of punks step in out of the noonday heat, perhaps for some food or maybe to keep their rainbow-dyed hair from bleaching in the Colorado sun. As I turn to go, lunch bag in hand, an iridescent adolescent taps me on the shoulder and asks, “Guess who we’re playing with tonight, at the Mercury?”

“You don’t have to tell me,” I quip, knowing instinctively that his band will be backing that local punk legend, Jello Biafra and the Dead Kennedys band.

It’s five minutes in and out of the McFood parlour. No time lost on that stop.

Most days, we live our lives in routine fashion; other days belong to the world. By 5:30, I finish dusting off some rusty COBOL programs in the confines of the Playboy Data Processing Center. At home, I settle in for the evening news and watch as Henry’s face dominates the airwaves. On Dan Rather’s video broadcast, a sullen, ageing Mr. Fonda seems poised, wearing a hat once worn by the actor, Spencer Tracy. The melancholy details of this story drone on. There are the Fondas: Henry’s wife, the glamorous daughter, Jane and stalwart son, Peter, meeting reporters in their hour of grief, asking for some human kindness and the private time to mourn.

Here are the doctors reporting the medical facts, “At 8pm, Mr. Fonda was sitting up in bed and soon after, stopped breathing.”

Here’s the wife, Shirley, “Henry died comfortably. He was in no pain. He had slept well the night before.”

Here’s Dan Rather’s face, with a Newman’s pathos, reporting the loss of an American icon.

With the sound off, another ½ hour of tributes fills the TV screen. Film clips stream by from a career on screen and stage. Images from The Oxbow Incident, Mr. Roberts, Twelve Angry Men and On Golden Pond flash by in 60-cycle-per-second celluloid fashion.

One final word from the announcer, “With his passing we have lost a piece of the American conscience.”

Lounging in reverie, with mind adrift, I am waiting for Marigold to get home. The evening’s entertainment awaits us. By 8pm we are off on a leisurely drive to Denver, in search of the Mercury Café and Theater, a hole-in-the-wall club in a rough-and-tumble city quarter. As we circle the neighborhood, it seems we have found a hostel for hostile youth – vagrants, loiterers and leather-jacketed punks with mohawk haircuts gather in the streets. We park the car and head for the hall. In this day of distractions and interruptions, the next episode falls right into place. A block from the Mercury, four fire trucks, three squad cars, an ambulance and several rescue teams converge on a corner apartment. We watch as firemen, in full-ready gear, race through first-floor quarters in search of danger afoul. As quickly as these teams arrive and converge, they disperse into the night. False alarm.

Are we are moving out of the fire and into the frying pan, we wonder, as Marigold and I arrive at the Mercury Theater door? We are confused about the guest list thing and can’t remember the band’s name who invited us. She has no ID. Our feverish punk enthusiasm wanes with every step on these rain-slicked city streets. Once more around the block and then, we spy the legendary Jello fellow, secluded in the band’s van, waiting for the rise of the evening’s tide. Once Marigold spots Jello, we step into a new dimension. In her past life, she was a minder for this ‘Now Happening Punk Phenomenon’. Jello introduces us to his entourage and we are pinned with honorary DK buttons. Huzzah! Our niche in the evening’s punk pantheon now secured, we are ushered into the Mercury Hall, courtesy of this guest list thing.

Henry, are you still out there? Your patriarchal spirit is all that guides us now as we enter this teeming cabaret, filled with the rebels, rockers and the would-be conscience of tomorrow’s America. You must have seen this coming, eh? Your grandchildren told you perhaps? Imagine our surprise old man. The lead band playing in the Mercury is Susan and God and they are screaming punk cacophonies behind the rhythmic back-beat of Gary’s drumming and the wailing guitar of a sixteen-year-old kid named Lousie. Lousie had worked that restaurant gig with Gary and I. He liked to wear a studded poodle collar while washing dishes. Today, his band plays the opening act. Marigold and I press for seclusion towards a bar away from the madding crowd.

For the next hour, we are glued to our seats, unmoving, deafened and stoic in the onslaught of amplified electrical noise. From a distance, we watch as Jello threads through the crowd unnoticed, sipping a beer. Now hear the truth old man! I stopped this Now Happening Punk Phenomenon and told him to dedicate a song to you. And you know what he said, old man?

“He wouldn’t like any of the DK music! This crowd has come to see the Dead Kennedys, not Henry Fonda.”

As Jello stalks the floor, his stature rises with each invisible step. Meanwhile, the rainbow-haired Massacre Boys from Salt Lake City bring their set to a merciful close. We are nursing another beer, watching the crowd mill about like ultra-neanderthals, well-heeled, snarling urbanites of the 1980s.

At the table nearby, a short-haired woman keeps accenting the tightness of her leather dress. A Mutt n’ Jeff duo are trading barbs near our seats. The large guy with the ‘Fuck-Off-Nazi-Punks’ armband threatens to pulverize this pintsize, Italian guy, who keeps insulting everything in sight. Off to one side, a perspiring white dude can’t keep his hand off his girlfriend’s striped behind. She doesn’t seem to mind. What everyone seems to mind is the interminable interlude awaiting the Dead Kennedys arrival. The loudspeakers drone obnoxious German beer hall music. By the stage, we can see Jello’s family arrive and watch as mother, father and sister are peering into the wings. Like guardians of the Star, they would sense his imminent appearance. Slam dancers crowd the stage, competing for the fetid oxygen and freedom of movement. The crowd seethes, the beer hall music bludgeons our ears and we are standing on our chairs as the air turns into pure heat. Another chorus of ambient noise plays counterpoint to the audience crescendos of DK fan-fever. Who feels like drinking?

CAZART! With a sweep from the wings, the DK’s take the stage. A shirtless Jello sneers at the crowd in measured disgust. He flings a beer can out on the sea of bodies. Two or three cans return. No Lawrence Welk here tonight. No anna-one-anna-two. Tonight belongs to the noble savage. Jello wails and the band strikes up the tunes – Holiday in Cambodia, Terminal Preppy, Trust Your Mechanic, Dog Bite and Secret Police fly by at the speed of sound. The DKs play bionically fast. Jello bounces from audience to microphone, to Klaus Fluoride, his bass player, to whatever inches of space surround his writhing soul. We are witnessing the movements of a man in an oversized bag of some sort, realizing for the first time that he is both trapped and set free in this plastic dimension of human space. This is no Mick Jagger strut we are watching. Jello moves like a comet on a short elastic band. He wails:

On cue, in the middle of this chorus to Police Truck, five Denver cops rush onto the floor of the Mercury. Dressed for crowd control with their tight leather jackets, visored helmets and tapping nightsticks, these guys out-punked the night. (Henry – look at the law of the West). They’re sniffing out criminals in a mutant culture crowd where obviously, nothing is wrong. The cops shove in and out of the kitchen and return to the dance hall floor. Marigold nods – our time as up. The police leave the Mercury Hall and we are trailing right behind. Outside the club, a phalanx of squad cars has staked out the street. Steam rises from the heat of Denver’s slippery sidewalks. We pass an alley where two street punks pair off to fight. A quick stiletto kick doubles the smaller man at the waist. Past the Mercury’s front street, we catch a last look at the white patrol cars, blinking blue and red in the great narcotic, American night. 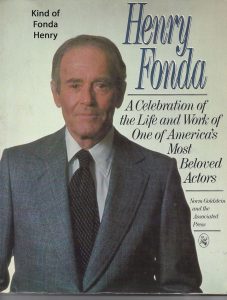 The evening crosses time’s shadow on this edge of Friday the 13th as we drive ourselves slowly home. Out in the cornfields, 20 miles north of town, a patrolman spots my erratic driving and vigilantly pulls us off the highway. Cops win, punks lose Henry. Once more I invoke your spirit, old man, not to spare us from the law but to carry my mind somewhere back in time. Mr. Fonda, I have to thank you for a day long gone (not today) but the 4th of July, circa 1966, when you welcomed Independence Day on that Malibu beach with your circus-style tent, wet bar, and hosts of celebrity guests. You probably don’t remember seeing me Mr. Fonda. Our gang of teenage party crashers were peering under the tent flaps from the outside in, staring at the likes of Steve McQueen (now gone), a long-haired band called the Byrds (now gone) and last but not least, your lovely daughter Jane (very far gone) dressed to the max in gold lame slacks. Out there in the listening audience, you can catch this story on the Liner Notes of the Byrd’s Easy Rider record, with son Peter writing about getting high on the 4th of July way back when, also long ago and far away.

What I want to say Henry, Mr. Fonda, Abe Lincoln, Tom Joad, Clarence Darrow, Wyatt Earp, Henry Thayer et. al. is that you opened this boy’s eyes real wide, even before I saw your movies or the Mercury Café. Jane Fonda in gold lame slacks. Maybe your eyes are closed now, old man but these here and thousands like them will stay open real wide, thanks to you. Amen sir, you have out-punked this night.